Hollywood has made it abundantly clear that they’re involved in a whirlwind affair with the remake. Unfortunately this affair is less than healthy and often down right dysfunctional. If Hollywood and remakes were a married couple the audience would take the part of the neglected and mistreated children who ultimately suffer the most from this misguided union.

It’s not necessarily remakes as a notion that are the problem so much as it is the films that Hollywood chooses to apply them too. There are simply some movies that were just too damn perfect in their original incantation to be tampered with, so when studio executives ignore common sense and common decency, we get pissed.

There are however movies out there that actually could benefit from a reboot. I’m talking about movies with interesting concepts that got lost somewhere along the way. What if instead of remaking beloved classics Hollywood turned it’s sights on properties with squandered potential? What if they took movies based on great ideas and compelling themes that suffered from poor execution and revamped them? Here are 4 movie remakes that should happen.

Percy Jackson And The Olympians: The Lightning Thief

This entry is a little bit of a childhood fan fulfilment on my part. I picked up The Lightening Thief in the 6th grade as a young greek mythology buff, I was kind of a weird kid, and was delighted by Rick Riodan’s affectionate and funny series about a young demigod in a modern world. Anyone whose read the books or hasn’t read the books will tell you the current film and it’s sequel are a steaming pile of chimera shit. Not only do they not function as film adaptions of a popular children’s series but they don’t function at all.

The plots are mangled and predictable, characters are changed and often forgotten, motives make little sense as result of these changes, and all the humour and charm of the source material is null and void. The novels are appropriately silly because greek mythology is silly. Riodan knows they’re silly. The fans know they’re silly. The characters know they’re silly. Somehow Fox wasn’t quite in on the joke and interpreted the book as an excuse to string together visual effects and action sequences.

Percy Jackson was supposed to be the next Harry Potter. That’s what the studios were banking on. Unfortunately they completely forgot about everything that made Harry Potter such a success. Yes, there are changes from book to screen and yes the books are better but the movies show a genuine love and respect for the books. Sure they eliminated side plots and every detail of the wizarding world didn’t make it in but never were the books so utterly mutilated, dumbed down and drained of spirit as Fox’s version of Percy Jackson. Don’t even get me started on how mangled the mythology is.

Even if you detach it from the novels it’s based on like anyone unfamiliar with the series entering the theatre all you’re getting from The Lightening Thief is some mild entertainment, the plot is all over the place and there’s really little to no character development to speak of. If you hadn’t read the books you probably spent more time being confused than amused as they race from plot point to plot point without ever giving much explanation.

If we could get an adaption of The Lightening Thief that actually followed and respected the series with all it’s quirky charm that would be great.

I might be the last person on the earth that remembers 2009’s Push. I’ll give you a moment to run to google to refresh your memory….

Remember now? Good. Say what you want about Push, but I actually kind of liked it. It’s stylish, conceptually interesting, and has some pretty stellar action scenes. Sure there were more than a few plot holes and character development was a little lacking in places but that wasn’t the real issue with Push. The real issue seems to be when it came down to the final product/draft they set their sights too low.

If you look at the initial premise it actually reads pretty badass on paper:

There are people with psychic abilities that range from telekinesis to precognition to brain scrambling death screams. In this world a powerful and shady international organization called The Division hunts down these super-powered people in order to run experiments in hopes of creating super soldiers. Our protagonist is a telekinetic or “mover” who’s father was taken by The Division when he was a child and now, all grown up, is hiding out in Hong Kong where he fails to cheat at gambling and is generally kind of a loser until a young girl who can see the future finds him and tells him he plays an integral part in taking down The Division.

The key to destroying Division is a woman who’s escaped experimentation with extremely powerful mind control abilities, a “pusher” only they aren’t the only ones who want her. Personally I think there’s gold in this here mine and DC imprint WildStorm must have thought so too if they made a comic prequel to lead into the film release.

The first act is actually pretty decent. The problems start when the plot shifts from a mission to shut down the Division into a three way race to find a suitcase containing a psychic steroid that we never really understand the importance of and ends with what feels like little pay off.

Forget the formula, get rid of the former love interest angle between the protagonist and pusher and drop Camilla Belle from the cast in favour of an infiltration and take down of The Division and you’re on your way to a pretty sweet ass movie. I mean seriously, how did she manage to have no chemistry with Chris Evans? Has she not seen the guy? 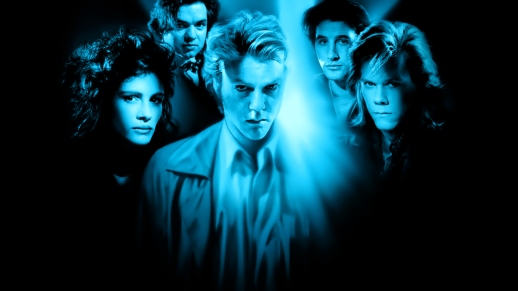 Fucking Flatliners. How could an idea as universally captivating and near perfect be as boring and askew as Flatliners? Is there anything Schumacher can’t ruin? The whole premise of the movie is a mystery that has baffled and inspired human beings since pretty much ever. What happens when you die? If you haven’t seen it here’s a quick synopsis: A group of medical students sets out to discover what lies beyond death by essentially killing themselves then using their skills to bring themselves back.

What waits for you in death? Guilt induced PTSD apparently. You get to relive your greatest mistakes and be tortured by flashbacks and hallucinations that may not be hallucinations. That’s pretty much as deep as the philosophical exploration goes. The pacing is terrible and the plot seems unstructured and redundant. You sit through five scenes of resuscitation that somehow manage to become less intense as they do despite higher stakes.

The film also suffers from a lack of likeable characters. Kiefer Sutherland is a real prick in this movie, and whichever Baldwin that was is such a sleaze. Julia Roberts is one of the only bearable people in this movie and she’s forced to spend the majority of the running time defending her right to participate and dodging the advances of the rest of the cast. Even when she gets to go under she doesn’t get to grow as a person for revisiting her past sins, she gets to be the victim of a childhood drama. And then there’s poor Kevin Bacon who no one listens to despite his position as the voice of reason.

However Flatliner’s biggest downfall is that it never really knows what it wants to be. It tries to be a psychological thriller, a ghost story, a philosophical drama of redemption, and a cautionary tale of hubris all at once and as a result succeeds at nothing. The script is even sprinkled with bad jokes as if to save it from taking itself to seriously which also fails. Had they just picked an angle to work at and ran with a consistent tone it would have been alright. The premise would make for an intense psychological thriller, a great horror film, or even a witty, and insightful black comedy.

I remember seeing trailers for The Black Dahlia way back in 2006. I wanted to see it so bad. At some point in my early adolescence I’d made the departure from greek mythology in favour of old movies on TCM and murder cases, so this appealed to me on so many levels. I was like 12 so I didn’t get to see it in theatres but in the months leading up to it’s release I’d watched a few documentaries on the real murder and I was eventually able to make my mom rent it on pay per view for me. To be honest I don’t really remember how I felt about it the first time I saw it. I liked it I guess. 12 year olds are easily won over. It was years later when I caught it on TV that I realized it was kind of a crappy movie with some pretty shitty performances from what should have been an incredible cast.

In looks and tone of Brian De Palma’s film are great but it doesn’t offer much else beyond the glamourous sets and some inspired cinematography. It’s shallow. After the first two acts being little else than fuzzy details the last twenty minutes are a mad rush of plot reveals and twists thrown at you with increasing frequency. The events don’t unfold they bash you over the head.The dialog unnatural and the progression from scene to scene feels awkward and forced. It’s a terribly convoluted mess that relies on genre cliches and the allure of it’s topic. And it’s a shame because it’s a really interesting topic.

An old school Noir farce about a detective trying to solve one of Hollywood’s most infamous, and true, unsolved murders. Elizabeth Short, a young, troubled, aspiring actress who was found mutilated and cut in two in the City of Angels in 1947. A murder with multiple suspects that still eludes many an arm chair detective to this day. With years of speculation, contradicting rumours, and a best selling novel at it’s heart the story is ripe with possibilities for a compelling and twisted ‘Who Dun It?’ with a side of a detective’s downward spiral into all consuming obsession.

7 thoughts on “4 Movies That Actually Should Be Remade”

An cynical 23 year old with an active imagination and foul mouth who's just trying to stumble her way into adulthood with as few bruises as possible.